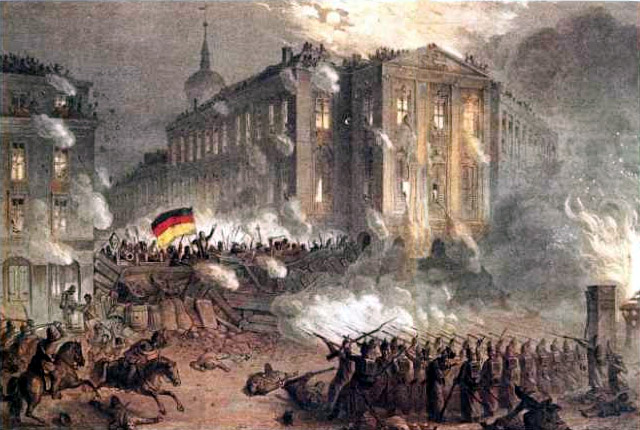 The logic of (r)evolution…
February 2nd, 2018
We have made a number of dialectical feints back and forth between evolutionary and revolutionary perspectives but overall our task here seems to be advocating from the sidelines the discipline of truly revolutionary activism. The sidelines is not really OK, but it is still something. It could be cowardly, but maybe not.

As the Trump era approaches we are going to see intimidation in action and the result may be ambiguous jargon on the issues of activist projects. In fact we have seen that already with the Sanders theme, ‘Our Revolution’, about which we have performed rain dances and other semantic ‘propaedeutic’.
We leave open the option of solidarity with these potentially coopted perspectives, potentially the only really practical avenue.
We are stuck with a strange situation: a true neo-communist perspective must consider more than the economics of the local working class. What about all those jobs that went to an international working class?
We should proceed as before with at least the idea of virtual revolution as a gedanken experiment with the possibility open at each point of activation of this potential.
(The women’s march to come is an interesting development indeed (one might have wished a more comprehensive protest, but the platform is excellent). One might note in passing that a women’s march was one of the key triggers of the Russian Revolution!)
The point here is that we can be theoretical and potentially practical at the same time. In the first case the perspective of revolution is a way to remind ourselves that real change is very difficult in the system that we have, and that this system is in fact regressing to the right.
One of the key issues is that evolutionary politics can be stuck in a nationalistic focus on the economic gains of one sector of the system, e.g. the working class. But the working class is an international entity and the problems in any case are far larger and complex than the economic. We need at least in principle a comprehensive platform of the kind the older marxism had. We can’t we use that? We can certain use it as a backdrop but we have a more complicated situation now, and in any case the american case, being that of a fully developed capitalist system, demands what in many ways would be a first: a post-marxist set of core principles that reflect the legacy but which speak to the reality of postcapitalism. The context here is more than economic, it is an ecological crisis, and the solution is going to conflict with economic issues.
In any case the crisis we face we should be daring enough to challenge conventional activism with the almost insuperable yet somehow more logical demands of a revolutionary platform. This barely exists and strangely the marxist left has very little to say here. Perhaps like poker players they are biding their time.
I fear that strategically it is proving counterproductive to have challenged the marxist canon. Actually we have embraced it, but with a demand that it refresh itself for a new era. Look at Leninism: it simply doesn’t apply to our situation, although in a desperate moment some of its aspects might replicate themselves. Overall we must move on from a failed legacy. (The first step to moving on is to read about ten bios of Lenin, if you have the time…he is a compelling figure).
But in general it would be of great interest to think in a wholly new way, and in this case with respect to the american system…
The point here is simply that capitalism is self-destructing, more than anything else due to climate crisis, and we confront the need for a whole new system:
a new economic system
a new political system, a new form of democracy
a new foundation beyond private property
new approaches to growth/no growth sustainable economies
a nationalistic platform in an international context
exposes of the reality of the american system: the imperialistic context, the military-industrial complex, wars manufactured for profit, the covert agencies and the deep state, the corruption of politics by capital, the reckoning of criminal conspiracies and getting it straight on 9/11 and the false flag ops we can only suspect are at the core of the corrupt and criminal system of politics current, and this includes, stunningly, complicity in the international drug trade.
This is a fairly stunning set of required elements but we should at least construct the full list, create a party and a platform that can deal with them, and an aspiration to a group in motion that is a party of the main party, etc…
So there it is: a virtual solution to the above from a not yet senile old timer: a platform, two manifestos, a proto-party: the Red Forty-eight Group, a first born succession if not successor of the classic marxist Old Testament with its 1848 focus: the once and future revolution and/or a working class evolutionary party as a focus of social democratic bluffing one’s way to a revolution.
The Red Forty-eight Group needs a huge set of study projects, among them the secular future (and equivalent) of religion, the nature of economic theories, practical training systems and bootcamps, a set of communes and cooperatives, etc…
The Red Forty-eight Group is a template and a basically neo-communist conception. At the start of Last and First Men, Nemo declared that every kid on his block was Captain Nemo, thus nemini…this new left could Nemini in motion, and/or a question like the Who Am I? of the Advaitists. Nemini x factors…plus three finger salutes, a cult, an army, a party, a commune, smorgasboard…

One thought on “Red Forty-eight Group (R48G): The logic of (r)evolution…”