We have insufficient evidence for the claim that homo sapiens (or anything else) could have evolved by natural selection.
It is a complete fiction. The whole issue of man is even more confusing that that of earlier life forms because we can’t even define man let alone explain how he evolved. The issues of complex consciousness (in some versions ‘self-consciousness, what’s that?), language, ‘mind’, aesthetic/ethical ‘sense’, and much else emerge suddenly (although with some intimations in homo erectus) and it is simply extravagant science fiction to claim these arise at random… 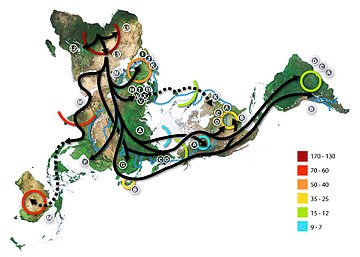 he possibility of linking humans with earlier apes by descent became clear only after 1859 with the publication of Charles Darwin’s On the Origin of Species, in which he argued for the idea of the evolution of new species from earlier ones. Darwin’s book did not address the question of human evolution, saying only that “Light will be thrown on the origin of man and his history.”[55]The first debates about the nature of human evolution arose between Thomas Henry Huxley and Richard Owen. Huxley argued for human evolution from apes by illustrating many of the similarities and differences between humans and apes, and did so particularly in his 1863 book Evidence as to Man’s Place in Nature. However, many of Darwin’s early supporters (such as Alfred Russel Wallace and Charles Lyell) did not initially agree that the origin of the mental capacities and the moral sensibilities of humans could be explained by natural selection, though this later changed. Darwin applied the theory of evolution and sexual selection to humans when he published The Descent of Man in 1871.[56]

One thought on “Human evolution – Wikipedia”