Source: Greenland melting is in overdrive … and it is speeding up 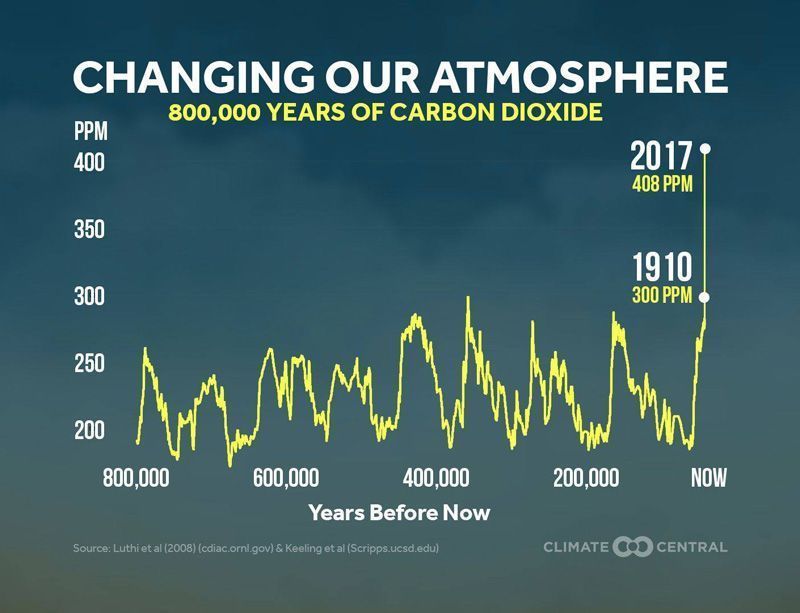 This year’s increase in carbon dioxide emissions from fossil fuels and industry is the largest in seven years. CO2 in the atmosphere has hit a new high.

Source: Global warming illustrated: 800,000 years of CO2 in one graph

I use my Times allotment in the first few days of each month…
thanks to marxmail
http://www.marxmail.org/msg155526.html
NY Times, Dec. 6, 2018
Greenhouse Gas Emissions Accelerate Like a ‘Speeding Freight Train’ in 2018
By Kendra Pierre-Louis

Greenhouse gas emissions worldwide are growing at an accelerating pace this year, researchers said Wednesday, putting the world on track to face some of the most severe consequences of global warming sooner than expected.

Scientists described the quickening rate of carbon dioxide emissions in stark terms, comparing it to a “speeding freight train” and laying part of the blame on an unexpected surge in the appetite for oil as people around the world not only buy more cars but also drive them farther than in the past — more than offsetting any gains from the spread of electric vehicles.

“We’ve seen oil use go up five years in a row,” said Rob Jackson, a professor of earth system science at Stanford and an author of one of two studies published Wednesday. “That’s really surprising.”

Worldwide, carbon emissions are expected to increase by 2.7 percent in 2018, according to the new research, which was published by the Global Carbon Project, a group of 100 scientists from more than 50 academic and research institutions and one of the few organizations to comprehensively examine global emissions numbers. Emissions rose 1.6 percent last year, the researchers said, ending a three-year plateau.

In ‘Burning Up’ Simon Pirani shows why fossil fuel consumption has grown so fast, and argues that only radical social change can prevent climate disaster now

Source: Fossil fuel production and use exploded in the 20th century. Can we stop the flow in the 21st?

A new report from the world’s leading body on climate change says we could see catastrophic global warming by 2030, and climate scientist Michael Mann says their predictions are too conservative

Source: Michael Mann: We Are Even Closer To Climate Disaster Than IPCC Predicts